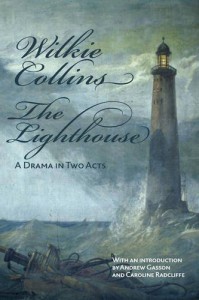 ‘The Song of the Wreck’ was reconstructed by Dr Caroline Radcliffe and performed by soprano Philippa Althaus and pianist Steven Teo for a performance at the Book to the Future Festival at the University of Birmingham on 27 October 2013 at the Barber Institute Concert Hall. It was included as part of a presentation on Wilkie Collins’s The Lighthouse which also included a performance of the central scene from Act 1 of the play.

The presentation was repeated in part for the Dickens Fellowship meeting in Central London on 20 May 2014 but the performers were unavailable to attend. They therefore kindly agreed to make an informal recording of the song to be played for the meeting.

The recording was made in one take on very basic hand-held recording equipment in a small practice room with a rather out of tune piano! Listeners are asked to bear this in mind and to view the recording as an informal and spontaneous rendition that does not aim to meet professional standards. It is with extreme gratitude and thanks to Philippa and Steven, who agreed to release the recording, that we are able to now hear Dickens’s reconstructed ‘The Song of the Wreck’ via the Dickens Fellowship website. If anyone would like to sponsor a higher quality recording they would be most welcome to contact c.radcliffe@bham.ac.uk

(The recording and arrangement of ‘The Song of the Wreck’ remains the copyright of Caroline Radcliffe, Philippa Althaus and Steven Teo and shall not be reproduced in any form without their prior, written permission.)